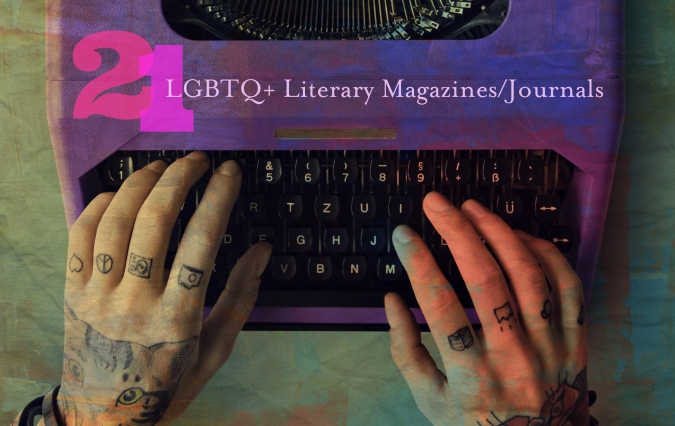 The listings below are literary magazines/journals that specifically focus on the artists and writers in the LGBTQ+ community. There are many other literary magazines that support LGBTQ+ contributors. For a more general list of all-inclusive/feminist lit mags, check out my list here: Feminist Lit Mags and Journals.

These literary magazines/journals are listed alphabetically; some are currently accepting submissions, some are temporarily closed. I’ve also included whether or not it is a paying market in the notes column. These lit mags/journals also fit the following criteria:

If you have suggestions for lit mags/journals I’ve missed, please contact me here or leave a comment below.

Trish Hopkinson is a poet, feminist, and LGBTQ+ ally. She has been published in several anthologies and journals and her third chapbook is forthcoming from Lithic Press in 2017. Hopkinson is co-founder of a regional poetry group, Rock Canyon Poets and Editor-in-Chief of the group’s annual poetry book series entitled Orogeny. She is a product director by profession and resides in Utah with her handsome husband and their two outstanding children. You can follow her poetry adventures on her blog where she shares information on how to write, publish, and participate in the greater poetry community at http://trishhopkinson.com/.

I was a free shoes kid again,
the result of the stroked ego
of some smug Santa.
Boots. Brown and yellow
like the shit I would get for standing
here. Coal-eyed clinging to my old
sneakers. Loved. Mine. Holy.
The only thing worse than
stinging eyes and sweaty socks
cold office tiles and sympathetic stares
were these boots so carefully disguised
as a gift.

Winter sits on windows ledge like piles of fleece blankets;
it presses in corners like packages waiting to be
shook, to be opened, to be husked and discarded
like fruit. Winter spreads up through the ground, it doesn’t fall.
Winter doesn’t stick to boots or mittens or tongues, it wraps
twice around and close to your chest. Winter burrows
under doorways. Winter isn’t white,
it’s grey, it’s lone trees and slush and soggy boots
by the fireplace. Winter is forgetting your coat
in November, it’s your parents singing on Christmas morning
as you drive to your grandparent’s house, it’s wishing
spring would come in February. Winter is a memory,
it’s an ache in your soul that reminds you
of sitting outside to watch the sun set.

Spencer Ballard is an aspiring queer poet/artist recently graduated from The University of Utah. He has been the Featured Poet of peculiar, and published several times. He often draws inspiration from “those thoughts you have in the shower that monopolize your attention for weeks,” and is a firm believer that you have to let a poem run its own course—especially if it’s going in a direction you didn’t intend it to. Spencer is currently the proud owner of four pet typewriters, as well as a rat named Emerson.

Aaron is a Utah Valley University student majoring in Writing Studies. He is C0-Editor-in-Chief of peculiar, and has served as Editor-in-Chief of Intersections , Tech Editor of Touchstones, and a senior editor for Essais, all student publications. His poetry has been published in Warp and Weave. Aaron has an unhealthy obsession with Channing Tatum, Calvin and Hobbes, and Thai food; he and The Walking Dead are currently seeing other people.